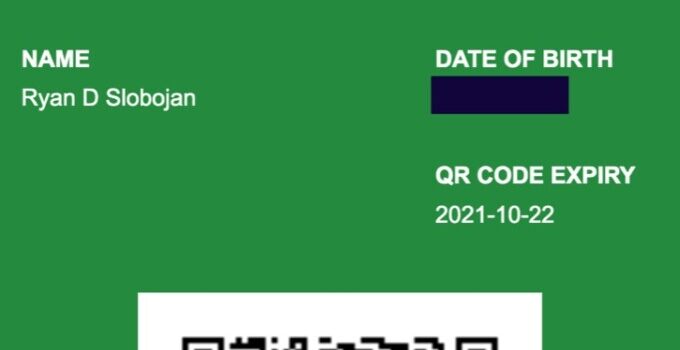 If you’ve been using a third-party QR code as your vaccine passport, you’ll have to download a new receipt from the provincial website.

Ryan Slobojan, a software developer for Vaccine-Ontario.ca and a member of the grassroots team, says the grassroots QR code was meant to act as an interim to the provincial one.

He also says they have shut down their QR verifier as of Monday evening. The hope is this will end confusion for those who managed to download their receipt through the grassroots software. Now that the provincial receipt has been rolled out, the need isn’t there anymore.

Slobojan says Vaccine-Ontario.ca started off as Vaccine GTA, a group of volunteers responsible, along with Vaccine Hunters Canada, finding vaccine appointments based on vaccine eligibility in late April. The creation of grassroots was the team’s second project.

“The grassroots is the second application that we’ve created and that was specifically focused around the proof of vaccination,” Slobojan says. “We saw that people were worried, like, ‘how do I know who’s vaccinated? Who’s not?’ There’s still a number of unvaccinated people out there who are already starting to get people concerned with going to certain businesses that were espousing anti-vax viewpoints, worried they might get sick.”

As of Oct. 18, all Ontarians who received a vaccine can download their enhanced digital vaccination receipt from the provincial website at https://covid-19.ontario.ca/get-proof/. Government-issued photo identification will also need to be shown to gain access to certain settings like restaurants, cinemas and performance venues.

“The enhanced vaccine certificates and Verify Ontario app will give our businesses further comfort in their ability to operate safely as we take further steps to protect people’s privacy,” Ontario Premier Doug Ford said in a press release. “These certificates remain a key element of our plan to protect the gains we have made while avoiding future lockdowns.”

Slobojan says the QR codes, which the province has issued, are very secure and everyone should move to it. 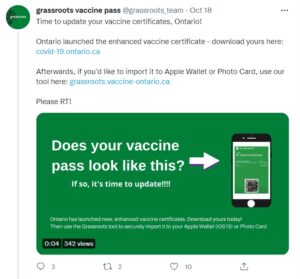 ‘They’re basically tamper proof,” he says. “And that is one of the great things about the standards they’ve chosen to adopt. It’s called SMART Health Card. And it’s becoming the federal standard across Canada. All provinces are moving to this and it’s going to be the federal requirement. Their solution is by far the better one. And now that that gap has been filled and this is available, everybody should absolutely move to it.”

The province staggered the download rollout by birth month to prevent a system crash over the weekend, but it seems the amount of people who tried to download their certificate on Monday caused a few technical issues on the website, where services were temporarily unavailable. It has since been resolved.

Slobojan says it’s been an interesting journey for them, as volunteer developers, and what they can do to help out. He also says the pandemic has shown some of the things that have needed fixing.