Community to pay tribute at Cenotaph near Humber Lakeshore campus

etobicoke24 humber college12 lakeshore17
The Humber Lakeshore community will gather at a new cenotaph in Colonel Samuel Smith Park this Remembrance Day to honour the fallen. The cenotaph...

The Humber Lakeshore community will gather at a new cenotaph in Colonel Samuel Smith Park this Remembrance Day to honour the fallen.

The cenotaph is a recent addition to the grounds of Colonel Samuel Smith Park as it was moved from Eighth Street in the Long Branch neighbourhood last year.

Sampson worked with Councillor Mark Grimes between 2017 and 2020 to find a new location for the Cenotaph. It was eventually moved on the eastern corner of Colonel Samuel Smith Park Drive and Lake Shore Blvd.

Sampson says the community will gather for a sunrise service at the cenotaph at Colonel Samuel Smith Park on Thursday, Nov. 11.

This Remembrance Day marks the centenary anniversary of the use of poppy as a symbol for remembrance. 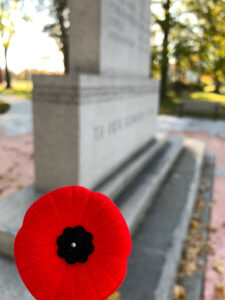 The Long Branch and New Toronto communities have paid their respects every Remembrance Day to this cenotaph at different locations since 1983.

Nadine Finlay, curator at the Lakeshore Grounds Interpretive Centre, says the current location is a more public place as it draws many people daily due to the proximity of many cultural and academic organizations such as the Humber College Lakeshore Campus. 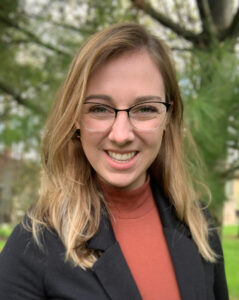 “It’s a beautiful place to mark the significance of what the Cenotaph means and causes us to reflect on,” Finlay says.

She says many in the community have family who participated in both World Wars.

“A large part of that, specifically in the last 100 or so years, is how the area has changed as a result of the World Wars,” Finlay says.

A major historic connection the Lakeshore Grounds share with the wars is through the former Lakeshore Psychiatric Hospital, according to Finlay.

“Many of the patients who came in after the end of the World Wars were suffering from what we now know as PTSD or similar types of physical and mental effects that the war had caused,” Finlay says.

The psychiatric hospital closed in 1979 and the buildings of the hospital are now a part of Humber College.

Another connection that the community shares with the World Wars and the military community was the munitions factory during the Second World War in a nearby Mississauga neighbourhood on Lake Shore.

“A lot of those people working in those factories…were the women who lived in Mimico, New Toronto, Long Branch,” Finlay says. “So, there’s a lot of that industrial history tied right into our communities.”

This cenotaph has inscriptions honouring the people who died in First World War, Second World War and the wars in Korea and Afghanistan.

Finlay says installations like a cenotaph are physical reminders of important moments in history.

“By having these at the forefront of our mind, it keeps those conversations going,” she says.

“It’s very important both to be mindful of our history but also to remember the lived experience of the people who really formed that part of our society.”