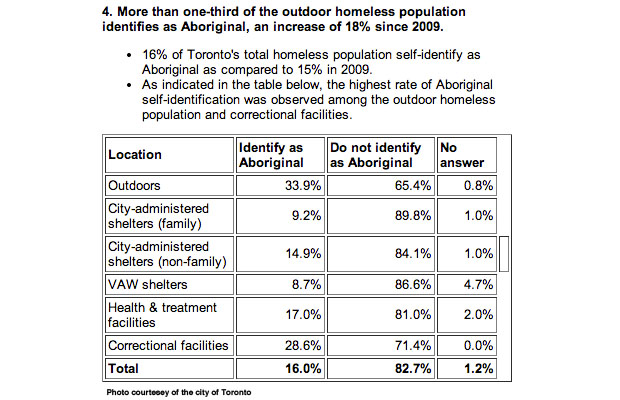 Aboriginal homelessness on the rise in Toronto

Aboriginal Issues10
An interim city of Toronto report shows a dramatic increase of aboriginal people living on the streets.

An interim city of Toronto report shows a dramatic increase of aboriginal people living on the streets.

The 2013 Street Needs Assessment (SNA) finds that 33.9 per cent of the people living outdoors identify themselves as aboriginal. This is an increase by 18 per cent since the 2009 assessment, according to the report.

‘‘I think there’s a real disconnect between the providers and the people in need,’’ says Les Aykler, vice president of Aykler Management, an organization that among other things is providing housing for homeless aboriginals.

The city’s Shelter, Support and Housing Administration conducted the SNA report, which aims to determine what services needs to be provided for homeless people in order for them to obtain permanent housing.

Aykler says aboriginal people coming to the city might underestimate how to obtain housing and are ignorant towards it, which could be one of the reasons for the increase of the outdoor population.

Aboriginal people make up 16 per cent of the total number of homeless people in Toronto. The number has increased by less than one per cent, according to data from the 2009 survey.

Aykler believes the city needs a different approach in terms of getting the numbers down.

‘‘They [the city] probably takes a bureaucratic approach. They need more input from community workers and urban elders that specializes on the aboriginal community. I think that can go a long way.’’

Skedline.com contacted city officials, but did not receive a comment.