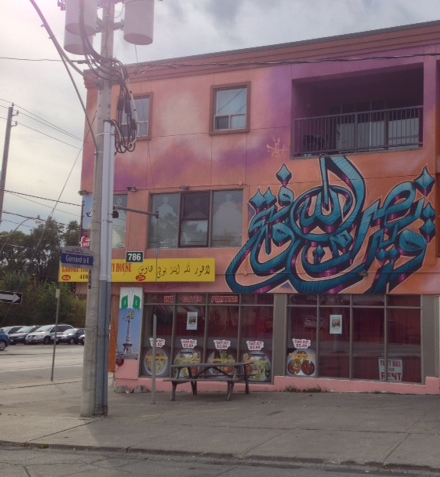 A mural that was commissioned by the City of Toronto's StreetART initiative has stirred up controversy in Little India.

A mural that was commissioned by the City of Toronto’s StreetART initiative has stirred up controversy in Little India.

Painted on the side of the building, which houses the Al-Tawakal mosque, is a verse from the Qur’an which has enraged some surrounding residents. The mural as interpreted by Salim Ahmad, the secretary general of the Muslim Canadian Congress, has been translated as reading, “have faith in Allah, who will give them ‘imminent victory’ in their endeavour against the enemy.”

Conversely, Ahmed Alhajri, a masters student in speech language pathology at Dalhousie University in Nova Scotia, said, “I wouldn’t be surprised to see so many words used to translate it because that translation could be more of an interpretation of the verse, which sometimes takes pages, even in the same language.” Alhajri also said that his interpretation of the mural would be, “victory from God and a conquest opening soon.”

Ahmad has begun a petition to remove the mural because he believes it is a phrase used as a battle cry. In his letter to the City of Toronto, Ahmad urges Mayor Rob Ford and City Councillor Paula Fletcher to immediately remove the mural.

The Riverdale Immigrant Women’s Centre which is also housed in the same building as the mosque, applied for the $17,000 grant from StrretART.

Zarina Belcher, a local resident and practicing Muslim, said that she understands both sides, but the mural has been blown way out of proportion.

“It’s a beautiful piece of art. The word jihad means to fight the cause for Allah, if your cause happens to be ill-natured then yes it can be used negatively, but if your cause is for good then the meaning is positive. I understand that he [Ahmad] is just trying to protect the mosque because people will look for any excuse to call Muslims terrorists.”