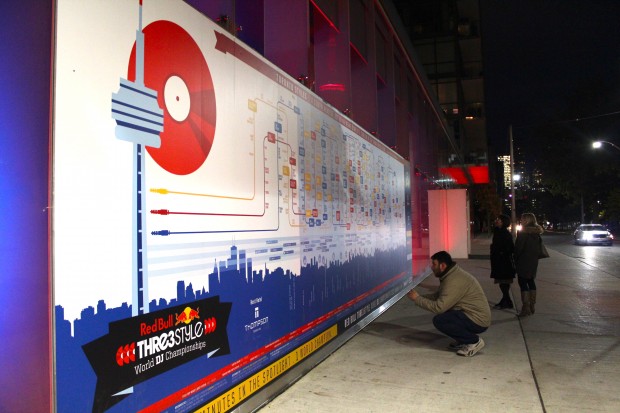 As DJs from all over the world gather this week in Toronto to compete for the Red Bull Thre3style World DJ Finals, part of...

As DJs from all over the world gather this week in Toronto to compete for the Red Bull Thre3style World DJ Finals, part of the focus is put on the local music scene and how it came to be through an infographic mural and a panel discussion, both at the Thompson Hotel.

Denise Benson, an experienced local music journalist and DJ, was called on to create an infographic depicting a timeline of Toronto’s music scene since the 70s through artists, promoters and record stores from the three broad Thre3style genres: dance/electronic, reggae/soul/hip hop, and rock/indie/alternative. She also hosted a panel discussion along with Mymanhenri, a member of Red Bull Music Academy, on Tuesday Nov. 5 with three representatives of each genre from the local music scene, Nitin, Brendan Canning, and Adrien King where they talked about the progression of the local music scene and what had inspired them musically from a young age.

Benson currently contributes to the Grid TO. She had also written a column for Eye Weekly and had a long-running program on CKLN FM. At the panel, Benson shared her initial thoughts on creating the mural.

“When the Red Bull Thre3style folks approached me to do this, I mean my first concern was that we’re going to miss people. How do we recognize? How do we cover the scope?” said Benson. “I was also kind of nervous that they would just want your Drakes and your Deadmau5 and the names that are known globally.”

Nitin is a DJ from Toronto that has toured extensively and played major electronic music festivals like Ultra Music Festival and Winter Music Conference. He co-found a label, No.19, that carries a number of Canadian DJs that are gaining notoriety in the scene right now. He talks about the recent popularity that has come to artists from the city. He points out  more and more artists are making a splash globally outside of the larger celebrities Benson mentioned.

“It is internationally known as the Toronto explosion in dance music right now and it’s really amazing to see that everyone’s touring,” said Nitin. “Often we’re on the road in Europe playing gigs together so it’s definitely something that’s recognized internationally and I think right now we’re even seeing a newer generation of artists that are coming up.”

Brendan Canning has been a staple in the Canadian music scene for the last decade for his work with Broken Social Scene, a Canadian indie band that has had an often changing but large roster of big names like Jason Collett and Emily Haines. He remembers an earlier explosion for Canadian artists.

“I guess the early days of Broken Social Scene there was a Canadian movement because there were the New Pornographers, and Feist, obviously you know when she was part of our group and Metric or Stars or Godspeed You Black Emperor kind of launched the sound,” said Canning.

“It’s cool seeing you and your buds getting to play big festivals seeing Feist sell out wherever like a few thousand people in Paris,” he adds.

Adrien King is better known as DJX. He hosted The Power Move Show on CKLN FM from 1989 to 2000 that played hip-hop by big name and local artists. The show is credited for popularizing hip-hop culture in Toronto. He credits modern technology and social media for the current success of local artists. He talked about the challenges of showcasing artists when the Canadian hip-hop scene was so young. Benson asked him about the pressures of trying to play local talent.

“I was aware of it when I was confronted by people that wanted their music on the radio,” said King. “Otherwise, I was just a DJ looking for that next record for people to hear and didn’t matter to me if it was Canadian or American in a lot of instances. Some people might not want to hear that.”

He points out that the hip-hop scene is very different now with artists like Drake who has become one of the biggest names in hip-hop.

“It makes me so happy to see that Drake happened,” King said. “He may end up being one of the greatest of all time. That is very arguable at this point but if you look at the big emcees it’s Kanye, Jay Z and Drake. He’s right up there and I don’t think he’s really going away.”

Nitin mentions another local star that has put Toronto on the map.

“On the higher end you have guys like Deadmau5 who are representing the EDM scene but I think for him and his being from Toronto and his success, it helps everyone because it’s more eyes on the city,” Nitin said.