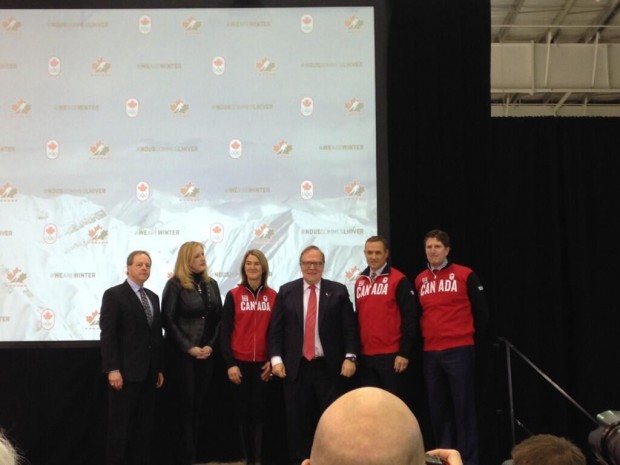 hockey21 Olympics16
Players old and new, injured or not, are on the roster headed to compete in the 2014 Sochi Olympics for men’s hockey.

Players old and new, injured or not, make up Canada’s Olympic men’s hockey team that heads to Sochi to compete in the 2014 winter games next month.

“In the end we’ve put together the best group of players we possibly can,” said head coach Mike Babcock after the team headed to Russia was announced at the MasterCard Centre in Toronto. “Now we have to become the best team we possibly can.”

Experience, position, speed, shooting and offensive ability were all taken into consideration by the Hockey Canada staff while looking over their options said Executive Director Steve Yzerman. He acknowledged the expectations are high in this country and believes he and his staff have responded well.

“We want to win gold, that’s our goal. But saying that, you can’t say it arrogantly,” said Yzerman. “We just watched the World Juniors. These countries are all really good, they’re all getting better – the Swedes, the Finns. . . the Russian program is strong, the U.S.A is outstanding and it’s hard to win. So our goal is gold. And there’s no question we’re going to be disappointed, everyone in Canada is going to be disappointed but we can’t go in there thinking it’s our god given right to win gold.”

Combining players from the same team to use existing chemistry is another strategy Yzerman said he is leaning on. Crosby and Chris Kunitz both play together in Pittsburg, Getzlaf and Corey Perry are line-mates on the Aneheim Ducks and Jonathan Toews, Patrick Sharp and Duncan Keith have won two Stanley Cups while playing for the Chicago Blackhawks

But this existing chemistry is not something that will solely determine the final lineups said Babcock.

“Last time we brought Keith and Seabrook (a defensive pairing for Chicago) because of that and they didn’t play together,” said Babcock. “We’re playing the best with the best.”

Working with and around injured players was also key in deciding Team Canada said Yzerman. Tampa Bay Lightning star Steven Stamkos was still a question mark leading up to the Team Canada announcement. Stamkos is recovering from a broken leg suffered on Nov. 11 of last year and will be revaluated when the team returns home from Winnipeg this week. Despite his injury Stamkos still appeared on the list of Canadian players.

“His rehab and his recovery are going very well. The doctors are pleased with how he looks on x-ray,” said director Yzerman, also general manager of the Lightning. “He’s pushing himself extremely hard so we’ll see how this x-ray goes.”

Olympic teams are allowed to make roster cuts up until 24 hours before the first game of the tournament. After that the lineup is final.

“Yzerman, because he’s GM of Tampa, has more intel than anyone,” said Josh Beneteau, a second year journalism student at Ryerson who also follows international hockey for hookedonhockey.com. “With the rule where they can up to 24 hours before the first game make a change, they should just go for it and if it doesn’t work out just call up someone else up.”

Goaltender Roberto Luongo is also currently out with an ankle injury for at least a week or two.

Some notable rejections from the team include Stamkos’ line-mate Martin St. Louis, San Jose Shark Joe Thornton (who made the 2010 team) and Philadelphia Flyer Claude Giroux.

“Today we can’t pull the eraser out and change the names,” said Yzerman when asked about players left off the team.

The Canadian Olympic Team will fly to Russia on Feb. 8 and start practicing the next day. Canada will face Norway on Feb. 13 in the first game of the tournament.

The full Team Canada roster is: