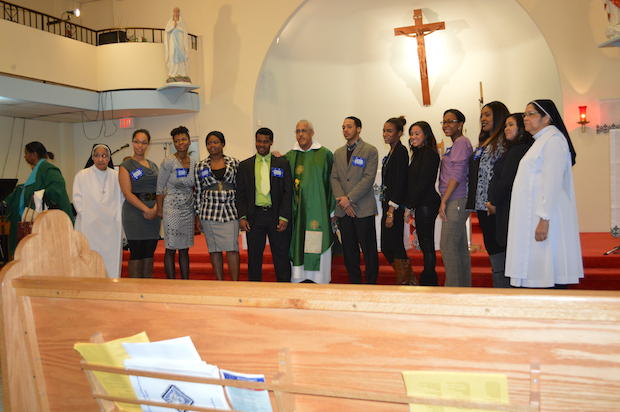 Sister Kathleen Jackman played such a vital role at the Our Lady of Good Counsel Caribbean Catholic Church in downtown Toronto that her legacy...

Sister Kathleen Jackman played such a vital role at the Our Lady of Good Counsel Caribbean Catholic Church in downtown Toronto that her legacy has been passed onto two generations.

The nun died almost thirty years ago, on Jan. 17, 1985, but she was such a role model for youth in the church, her memory was honoured with a scholarship that is helping young churchgoers to this day.

And now, Sharon Mills-Fields, one of the people whose lives she touched, is encouraging youth to think harder about where their scholarships are coming from, and the purpose they serve. Mills-Fields was once a member of the youth group developed by Jackman in the early 1980s.

The Sister Kathleen Jackman Memorial Scholarship is awarded each year to eight to 10 youth of Caribbean descent, for their post-secondary education. The scholarship fund is a $2,000 award. The Bank of Montreal gave the scholarship funding an additional $2,000 apiece, for a total of $4,000.

A church service was held yesterday in honour of Jackman and Father Howard, the driving force behind the scholarship, who passed away two years ago. During the service, celebrants spoke of Jackman’s advocacy and loving personality like a modern saint. She worked with underprivileged children and youth, giving them the guidance, motivation and positive reinforcement, to let them know they could be successful one day.

Kathleen Mills-Reece has been the chairman of the scholarship committee for five years. Her daughter, Sharon Mills-Fields has been an active participant at Our Lady of Good Counsel. Mills-Fields’ son, Kempha Fields has also, been active at church and one of last year’s award winners.

“Sister Kathleen Jackman was a favourite among the youths. She founded a youth movement,” Mills-Reece says.

Mills-Reece remembers Jackman as a driving force behind youth involvement, education and community advocacy at the church, bringing in dignitaries and professional people to speak to the youth about different issues and topics. Jackman was very helpful in encouraging youth to be proactive about their future.

“Some of the highlights I remember were the weekly meetings we had…she got me my first job as a summer camp counselor. From there on I started working with children, I’ve been teaching for over twenty three years,” Mills-Fields says.

Jackman was a jovial and positive influence for many youths. She was vibrant and a great storyteller, Mills-Fields remembers. She would tell stories about her dancing and playing Mas (participating in Carnival) back in Trinidad.

“I would say that this scholarship is very beneficial for African and Caribbean Canadians. It helps for school and it’s honoured not by your skin colour but for your accomplishments,” says nineteen year old, Kempha Fields a, second year student at Centennial College.