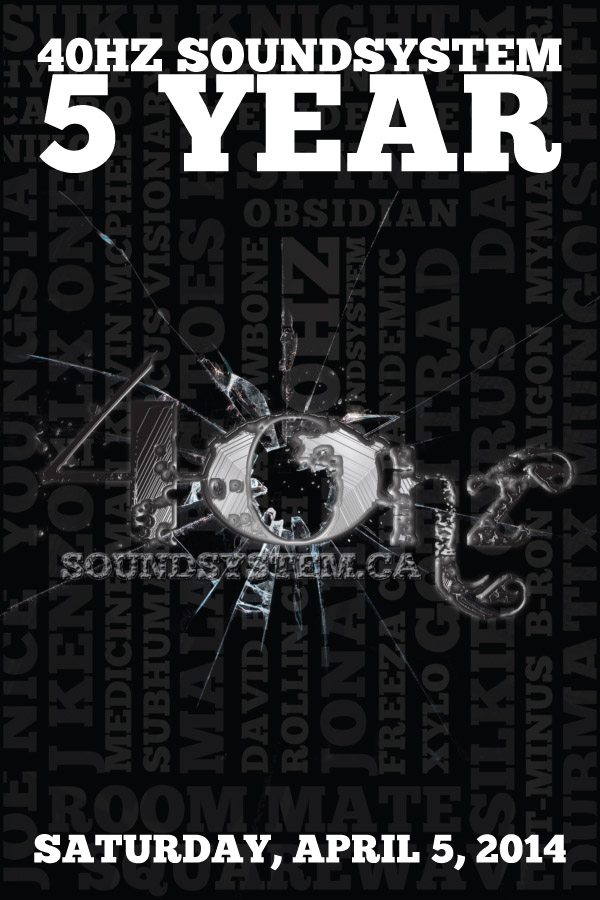 40hz is celebrating five years of ‘bass culture’ in Toronto

A Toronto sound-system crew that’s devoted itself to spreading bass-heavy music is celebrating its fifth anniversary of bringing bass music culture to Toronto this Saturday.

40hz, started by Jenn Stein and Jon Switzer in 2009, uses an enormous bass rig the group built to bring a physical experience to music listeners across the city.

Ryan Cotton, co-builder of the speakers in the system says the experience is irreplaceable.

The 40hz sound system plays music in a way that the listener couldn’t replicate at home, even in hearing more of the song, according to Cotton. [Shot courtesy of Stein]

“When the venue is packed and the music gets turned up that extra notch for the headliner, the air is electric,” says Cotton. “The fantastic ability of the 40hz sound system is taking something based in sound and auditory response and creating an actual physical presence to that sound. The system makes you feel the music.”

Drum and bass culture –  amplified music like dubstep, trap, house, reggae dub and other bass-heavy music genres – started in Jamaica and later flourished in the United Kingdom. Stein, 40hz’s co-owner and operator, says she would like to see the culture thrive like it has in other cities worldwide.

“In 2010, we went to the Outlook Festival in Croatia, which is basically the biggest bass music and sound system festival in the world,” says Stein. “After standing in front in the Mungo’s Hi-Fi system we knew we had to bring this experience back to Toronto.”

To date, the 40hz sound system has been used by hundreds of DJs, including Juno-winner Dubmatix, and hosted 19 productions. The system can reach 27,000 watts and according to Switzer, owner and creator with Stein, the system plans to continue expanding.

“We are actually unveiling our new, 8-bin sound system, for the first time at one of our events. I’m pretty stoked about that alone,” says Switzer. He says he and the system’s team are looking forward to the next five years. “More music, more events, more people and more amazing sound!”

Stein says they developed the system for the music and the community.

“The kind of music we listen to isn’t main stream so you’re kinda the odd man out in a lot of places, but then you realize there are a whole lot of other people who love the exact same thing,” says Stein. “Music speaks to people on so many different levels. So much is in how it’s played that people don’t realize – like kick drums that get you in the gut, and then watching all your friends with the same smile on their faces from that feeling.”

For anyone 19-plus looking to join the bass culture community the 40hz crew says everyone is welcome.

“Being able to witness people’s reaction to this, is extremely rewarding,” says Cotton. “If you’ve never been to a bass music party, going to a 40hz event, isn’t just a party, it is an experience. I highly recommend trying it out.”

40hz is unique in that they organize, promote, decorate and host their events.  The anniversary party highlights 40hz’s inspiration; Mungo’s Hi-Fi and boats local talent such as Dub Connection, Big Toes and Spyne. The celebration will be held at St George’s Church 17 Regent St. in Toronto.