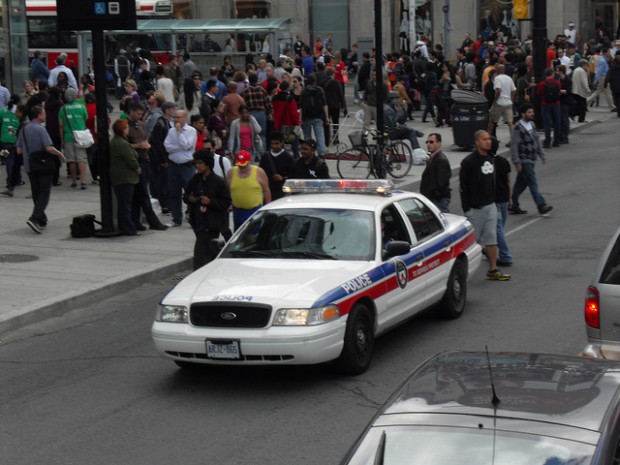 Crime30
The Toronto Police Services Board wants the public's feedback on a serious of proposed changes to regulations on how officers conduct street checks. The public...

(A police cruiser in downtown Toronto- Photo by William Mewes)

The Toronto Police Services Board wants the public’s feedback on a serious of proposed changes to regulations on how officers conduct street checks.

The public is asked to attend the board’s next meeting April 8 to respond to a draft policy presented last week that makes some major changes to existing policy.

Frank Addario of Addario Law Group presented the draft policy at a Toronto Police Services board meeting last week that suggests major changes to the current system of how officers conduct street checks, including reducing the number of checks done as well as making sure people are aware of their right to disengage or exit the interaction if they are not formally detained by an officer.

“The so-called carding issue came because of a blurred line between conversation and investigative detentions, ” said Addario at the meeting. “The community has told us that the balance is wrong. Too many citizens do not know their rights whereas the police in those conversations know the limits.”

Addario also stated said that there currently isn’t any formal policy or regulations on how constables can engage in conversation and questioning with people on the street and that that needs to change.

According to his presentation at the meeting, the courts have said  it is tempting for police officers to “rely on the citizens’ ignorance of his or her rights to extract information where there is no suspicion or ability to detain.”

Jamil Jivani gave a deputation at the meeting. In an interview with Skedline, he agreed that these street checks need to be more regulated.

“There needs to be some kind of protocol for stops,” Jamil Jivani, who gave a deputation at the meeting, said in an interview. “If you’re going to stop someone and come into their life, there is a bare minimum of information they deserve.”

Jivani, a recent Yale law graduate, founded the Police Literacy Initiative in the Fall of 2013, an organization that brings young professionals, university students, and people who work in law enforcement together to come up with way to improve the strained relationship between the police and Toronto communities. He believes disengagement might be the key.

“I’m a believer that some relationships improve with space and time. It’s a matter of not just doing things, it’s recognizing who needs to be stopped and who doesn’t,” said Jivani. “When people start to see that that discretion is being used in a way that think is fair and balance.”

While Addario also echoed Jivani’s sentiments but did say that the practice of street checks will simply be more regulated, not eliminated.

“Eliminating carding will not stop the police from talking to people. It will just drive bad practices underground,” Addario said.

Lawyer, Peter Rosenthal, who was also at the meeting, feels differently.

“This practice would never be tolerated in a middle class neighbourhood,” said Rosenthal.

The draft addresses three ssues: defining the difference between police checks and detentions, the goals of the interviews conducted during these checks, and making sure that those interviews comply with Charter of Rights and Freedoms and the Human Rights Code.