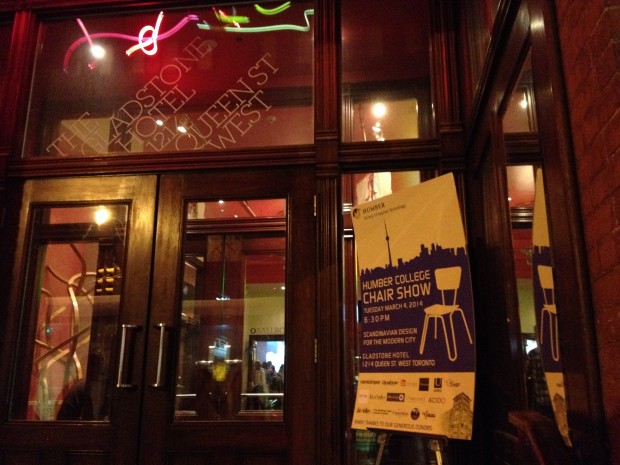 Students and alumni came together to support the 14th Annual Humber College Chair Show at the Gladstone Hotel Tuesday.

Entrance to the chair show event in the lobby of the Gladstone Hotel.
Photo by Alison Greco

Students and alumni came together to support the 14th Annual Humber College Chair Show at the Gladstone Hotel Tuesday.

The show was open to the public where students of the Industrial Design program showcased their versions of Scandinavian styled chair pieces.

Although it was a showcase and prize raffle for visitors, it was a competition for the designers.

“All the students here tonight are in second year of Industrial Design degree program,” said the program’s coordinator, Patrick Burke. “Our judges are from distinguished furniture manufactures and the winners will be chosen based on the sustainability, ergonomics, presentation, and how well they integrate the Scandinavian theme into their designs.”

The students competing were in teams of two or three and all teams spent about eight weeks preparing for the event, according to competitor Josh Gadomski.

Gadomski and his two other team members, Jacob Tomlinson and Aoun Syed, worked together to create an unique design called Angular. It is a side chair designed for either a living room, dinning room, or patio. It also comprises of two recycled materials: cold-rolled sheet metal and baltic birch plywood.

“It took about eight weeks. Three for brainstorming and designing and the rest actually building it, “ Gadomski said. “It’s compact and it also gives off the illusion that it’s not as strong as you’d think but it is, a 280 lbs man can sit in it.”

Compact and minimalism is key in fellow-competitor, Paolo Enrique’s eyes, whose team designed a lounge chair and foot rest, which combines comfort with functionality for an apartment or condominium.

Enrique’s design model at the event.
Photo by Alison Greco

“The whole aspect for us was less design more function. Instead of spending so much time on how the chair will look, we tried to think about how many ways it could be useful rather than make it something for someone to just sit on,” Enrique said.

The function-over-design approach is the basis of the Scandinavian style. It tests what one can create out of the fewest resources.

“The profile is very minimalistic with the shade of the wood and grey felt. It’s all very simple…less is more,” said Industrial Design student Ryan Ebbers about his team’s wool-on-wood modern chair piece.

There were 10 judges overall at the event. They were from companies such as Neinkamper, Chair Source, Borgo, Umbra, and Copernicus.  They spent two hours roaming the ballroom inspecting every team’s design until 9 p.m. when the top three designers were chosen.

The runners-up at the event was team Basinet, who designed an elaborate lounge chair out of string material and the winning prize belonged to team Paragon, who made a simple, yet elegant thin-wood set.