Laila El-Haddad, a Palestinian writer who travels between The Gaza Strip and The United States, made a special guest appearance at TPFF to talk...

The familiarity with Toronto’s major events remains true, especially when it comes to Toronto International Film Festival (TIFF). However, many people from the GTA area may not have the knowledge of Toronto Palestine Film Festival (TPFF).

Laila El-Haddad, a Palestinian writer who travels between The Gaza Strip and the United States, made a special guest appearance at TPFF to talk about recipes from her new cookbook, the Gaza Kitchen and its importance to the Palestine heritage.

The non-profit, volunteer-based organization ran from Sept. 27 to Oct.3 in 2014. The focal aspect of TPFF is to familiarize the GTA folks with Palestine cuisine, cinema, art and music. Since 2008, TPFF has been the provider of bringing Palestine culture right into the heart of GTA.

This year, the events for TPFF took place at the TIFF Bell Lightbox, the AGO Jackman Hall Theatre, Beit Zatoun (Koreatown)  and Cinestarz (Mississauga).

The Sunday’s sahtain Palestinian brunch started at 11 a.m. at Beit Zatoun followed by a discussion panel with a special guest, Laila El-Haddad on Sept.28.

Beit Zatoun hides behind trees at the corner of Markham Street just off Bloor and one block west from Bathurst subway station.

Laila El-Haddad is a Palestinian freelance journalist, photographer, activist, wife and a mother. She was born in Kuwait, raised in Saudi Arabia and spent her summers in Gaza, according to peacexpeace.org.

At the panel discussion at Beit Zatoun, Laila El-Haddad wore a green and grey graphic T-shirt that said, ‘The Wall Must Fall.’ The sign refers to the separation or apartheid the Israeli government built in the West Bank to separate Palestine from Israel.

Besides her reportage in BBC, NPR and CNN, Laila El-Haddad had her work published in The Baltimore Sun, The International Herald Tribune and others. She also reported for the english web site; Al-Jazeera, The Washington Post  and The Guardian during her travels between the Gaza Strip and the United States, according to justworldbooks.com.

Laila El-Haddad and co-author Maggie Schmitt obtained 130 recipes during their travels from the Gaza Strip in the summer of 2010.

On a web site where you may purchase The Gaza Kitchen, Laila El-Haddad and Maggie Schmitt wrote their reasoning behind the not so typical cookbook. “The history of its population can be traced through its recipes, which reflect the influence of exile from all over Palestine as well as a changing society and customs. A cookbook which brings together these recipes serves as testimony to this heritage and history.”

At Beit Zatoun, Laila El-Haddad further talked about the identity and connection Palestinians have with food and their land.

“The recipes tell stories about the people from town and villages that no longer exist on a map. They (villages) were depopulated or destroyed but the people still exist and currently live as refugees in Gaza,” said Laila El-Haddad.

‘The unique and culinary heritage’ echoed in Laila’s words as she answered the crowd’s questions about her travels in Gaza.The recipes tell ‘collective Palestine struggle.’ Laila’s knowledge on the background of Gaza and its people helped to assemble the type of cookbook to retell stories and bind them permanently.

Special guests such as Mohammad Bakri and Tim Schwab also appeared in a discussion panel to talk about Palestine films,  after showcasing a documentary called Cinema Palestine on Wednesday Oct. 1st at the AGO Jackman Hall Theatre.

‘Cinema Palestine explores the life and work of multiple generations of Palestine film makers and media artists who live in Middle East, North America and Europe,’ said the two guests when describing their film.

Mohammad Bakri who produced Janin Janin in 2002 is a film about the battle of Jenin in a Jenin refugee camp in West Bank. He said the idea for it came as an accident.

“Sometimes you have no choice. Choice has you. And sometimes you must act because you are a human being,” said Bakri.

Tim Schwab said Bakri appears both an actor and a director in Cinema Palestine. The film humorously showcases stereotypes portrayed by the media about Palestinians. On a serious note, the film also helps to shed light on Palestinians who are raised and born outside of Palestine and about Palestinians born in exile.

Programmer, Tamara Sabarini thinks the panel discussion at Ago Jackman Hall Theatre went ‘great.’ The discussion between Bakri and the audience heated up when the sides exchanged their ideas on racism and nationalism. Sabarini also said Cinema Palestine is one of her ‘ favorites because it signifies the whole reason why the TPPF exists.’

“There is this idea that there is this one uniform way of thinking and that Palestinians are all this or all that. And it’s not true. I think this film does a really good job of showing why it’s important to show Palestinian film,” said Tamara Sabarini.

Tamara Sabarini plays an instrumental role in TPFF. Her tasks vary anywhere from choosing the guests, booking flights for them, booking the venues and seeing the entire festival play out as scheduled. Her position, like many others who are involved in TPFF, is non-paid. Her dedication to the organization is solely for the purpose of her individual interest.

“It (Cinema Palestine) really illustrates how, even amongst Palestinian directors that are involved in film, no’one can agree on what the objective is. And that’s the whole point. That everybody has this different idea of what Palestine cinema is or how to portray Palestine cinema,” said Sabarini. 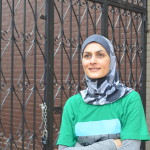 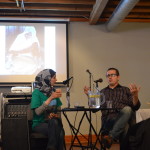 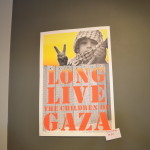 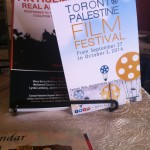 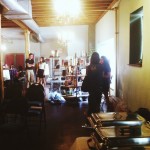 Inside Beit Zatoun during TPFF, ’14. Photo courtesy of Anika Durisova 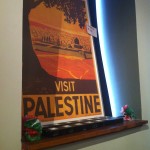 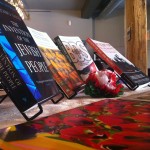