Courtesy: Wikicommons John Tory’s first 100 days as mayor of Toronto have been marked by a flurry of activity. First elected mayor on October... 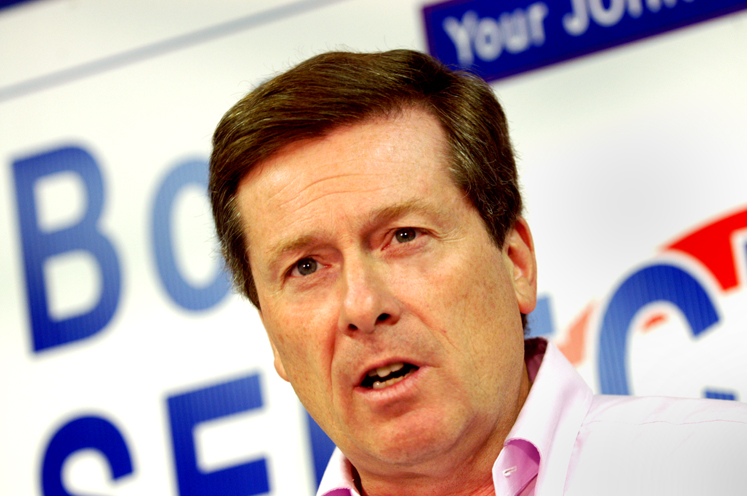 John Tory’s first 100 days as mayor of Toronto have been marked by a flurry of activity.

First elected mayor on October 27, Tory has become known for his unprecedented announcements at City Hall, and as a politician he focuses on outworking those around him.

His days begin just as the security guards open City Hall, and end after most of his peers are safely tucked in bed.

Despite the frenetic schedule that frequently takes him outside of City Hall to the far reaches of the city, the result is a reassuring calm that has descended on Toronto.

Toronto’s municipal makeover is only the beginning, but already, 100 days into his term as mayor, Tory has changed the global narrative about his city. Shut it down, in fact.

Toronto feels like a different place. There are no whispers of late-night drunken parties inside the mayor’s second floor office.

Tory had two urgent priorities entering city hall as mayor last December. The first to be elected mayor without first serving as a city councillor and the second, to restore public’s confidence in their city.

According to the Toronto Star, polls suggest nearly two in three Torontonians approve of the job he is doing.

The numbers might be higher if Tory had not delayed action on his election promises – including the increase in TTC fares.

According to the Toronto Star, TTC fares needed to go up because public transit was in worse shape than Tory imagined. Rob Ford cut back bus routes to the suburbs so drastically that he had to restore them. The fare hike went to repair the damage.

Not all change to public transit was an increase. Children under 12 now ride the transit system free.

The next hundred days will tell us even more about Tory and the plans of his administration.

The city will replace its city manager, head of the civic workforce, and the police board will choose a new chief.

Tory’s imprint will be on both decisions, but few will question his choice of city manager.

Apparently, the mayor is a quick study. He likes to close gaps, and fix problems.

The next 100 days will tell Torontonians how true this is.