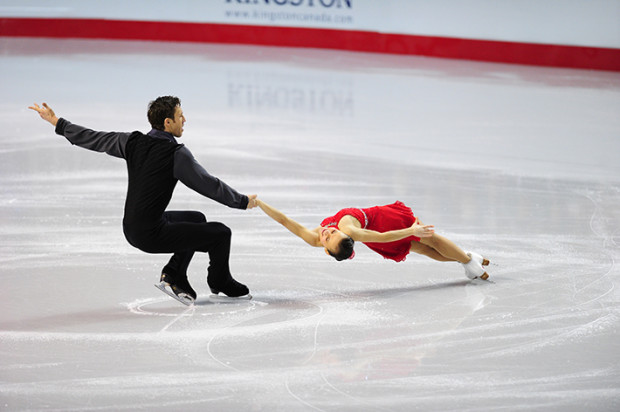 Olympics16
Taking on the figure skating World Championships as a new skating pair is a bold move. Especially when you’re up against some of the...

Taking on the figure skating World Championships as a new skating pair is a bold move.

Especially when you’re up against some of the world’s best teams, not to mention, the undefeated Canadian pair who won gold for their short program at World’s, Meagan Duhamel and Eric Radford – who have trained for five years together.

But for Lubov Ilyushechkina and Dylan Moscovitch this is just the beginning of what is expected to turn them into a competitive partnership to watch in the next few years.

Ilyushechkina and Moscovitch are Skate Canada’s newest team to compete in the ISU World Championship taking place in Shanghai, China.

But despite making an impressive entrance as a new team by winning gold at both the Skate Canada Challenge and the ISU Warsaw Cup in Poland, their journey to Worlds hasn’t been as smooth as they would have liked.

From the beginning, the pair have faced numerous setbacks.

Moscovitch, a 30-year-old figure skater from Toronto, has put everything on the line to compete with a new partner. He was previously partnered with Kirsten Moore-Towers at the 2014 Olympic Winter Games in Sochi, Russia, where they were silver medallists in the Figure Skating Team Event and finished fifth in the Pair’s Event.

But soon after their return to Canada, Moore-Towers decided to leave the duo for a two-quadrennial future –or another eight years– to compete in another Olympics with a younger partner.

This made Moscovitch have to choose between finding a new partner or quitting competitive skating altogether. But after competing in the Sochi Olympics, Moscovitch was in the prime of his athletic ability and felt that he still needed to give what he had as a competitive skater.

While searching for a partner, he came across Ilyushechkina, a 23-year-old figure skater from Moscow, Russia, who he had competed against in the past. Moscovitch knew she hadn’t been competing internationally in the last year, so he sent her a Facebook message to see what her plans were.

It was the perfect opportunity for Ilyushechkina to get back into the skating scene after taking some time off in the aftermath of some pairs partnerships of her own that didn’t work out.

Despite having been the 2009 World Junior Champion, Ilyushechkina needed to put in the work if she wanted to compete again.

“All I was thinking was [about] how I could get back [into skating],” says Ilyushechkina. “I wanted to show what I could still do.”

Growing up, she didn’t always agree with the Russian skating system. “At a certain age, the coaches don’t allow you to [skate] how you want,” she says. “I just wanted to enjoy skating.”

She says the Russian skating community is very much prescribed for young skaters if they show a high athletic ability for the sport. When she decided to commit, everything in her life revolved around training and becoming more competitive.

And Moscovitch’s father Jerry knows what it takes for a family to put their child into figure skating. “It’s difficult and time consuming,” he says. “You don’t know whether your child will be successful or not, but you want them to do well so you’re investing a lot of money into it.”

Ilyushechkina left home at the age of 14 to skate with a partner in a different city and she only briefly returned when she was studying in school. “I’m very independent,” she says.

Without a Canadian visa, Ilyushechkina agreed to meet Moscovitch in Detroit, Michigan to see if they were compatible as a team.

“We were brought up by different training methods,” says Moscovitch. “We had to pick the best part of our training techniques and put them together.”

The pair practiced for six weeks starting mid-May without a coach while they  waited for her Canadian visa to be processed and her release from the Figure Skating Federation of Russia. The Federation is a membership-based organization that keeps contracts with their athletes – and Ilyushechkina’s wasn’t up.

With Ilyushechkina receiving her Canadian visa in late June, they still couldn’t register for funding from Skate Canada because they both needed to be current Skate Canada members who skate competitively, free from other contracts. Not to mention, the registration deadline was Oct. 31 and the Figure Skating Federation of Russia didn’t release her until mid-October. Even in the two-week time crunch, the pair weren’t eligible because they weren’t skating competitively in Canada yet.

With Skate Canada being the largest figure skating governing body in the world, they provide all their national team athletes with a sponsorship if they register on time and are eligible. It wasn’t until late October that Ilyushechkina was approved by the ISU to compete internationally because it’s a requirement to be released from your country’s contract before you join another’s.

Being that this tryout was completely funded by the both of them, they spent many nights couch surfing with friends of Moscovitch and occasionally had local coaches come and help.

“It’s stressful when you change everything you know and just go for a hail Mary,” says Moscovitch.

He even had to drive back to Waterloo to buy Ilyushechkina a new pair of skates because hers were old and worn.

Despite that they both came from supportive parents, the pair still had to raise their own money in order to afford competing. The outcome was their donation page where family, friends and fans could help support them.

“If we put an overwhelming amount, people may feel like their donation doesn’t count,” says Moscovitch.

But with a few wins already under their belt, the pair wasn’t aiming to win gold at World’s. In fact, they placed 11th in the pairs short program skating to the Michael Bublé’s hit “Feeling good“.

“We are not focused on beating anyone,” said Moscovitch before competing. “We are a new team and aren’t sure how we [will] measure up in the world of sports.”

With the pair claiming 11th place out of 19 other teams, it’s more about exposure and testing the waters, than anything else.

Right now the pair is focusing on fine tuning their skills and raising the quality of their elements.

“After worlds and the season is over, we’ll start working on some new lift positions, increasing the quality of our spins and introducing some throw quad’s,” says Moscovitch.

Despite that they had a shotgun-start of a pairing, the two are really happy with the decision to be together.

“We wanted to make this work and part of the process is having doubts once in a while,” says Moscovitch. “It’s [about] how you handle them and push through them that is important.”

Ilyushechkina says that their greatest strength is that they can communicate well despite only really knowing each other personally for less than a year.

“We have an ability as a new team to really connect and tell a story on the ice and draw people in,” says Moscovitch. “I think that came naturally to us.”

To learn more about their previous competitions and to support them, visit their donation page.

Learning about the world by meeting fascinating people and sharing their stories.