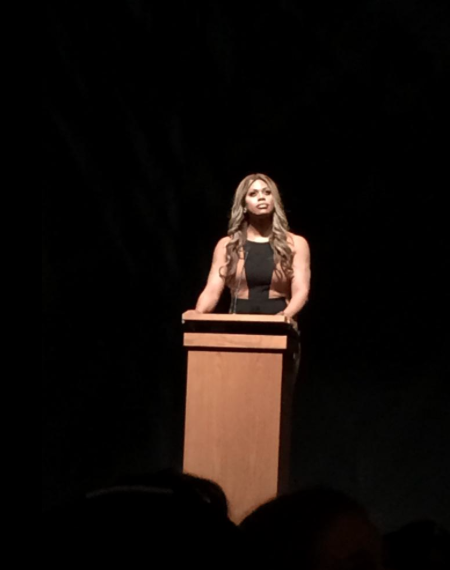 Laverne Cox meets Toronto in Heart Felt Talk On March 27, fans waited anxiously in the cold in hopes to meet Laverne Cox at...

On March 27, fans waited anxiously in the cold in hopes to meet Laverne Cox at Elgin and Winter Garden Theatres. Cox is best known for her role in the hit-show Orange is the New Black. However, what makes her particularly unique is her identity as a transgendered woman. Cox has become the first trans woman of color to have a leading role in a mainstream television show, as well as gracing the cover of TIME magazine as the 4th most influential character of 2013.

Organized by multiple student unions across Toronto, Laverne spoke eloquently yet with an undeniable strength to her voice, that griped the audience. She spoke about her life as a child and the consistent shame that she internally dealt with through home, school and personal life. She says, “ from a working class background, raised by a single mother, I stand before you an artist, and an actress, a sister and a daughter and I believe its important to name the various intersecting components of my multiple identities because I’m not just one thing, and nether are you.”

In the very beginning of Cox’s speech she highlighted the homicide, employment and suicide rates among those within the LGBTQ community, specifically black trans women of color in America. She says, “According to the national coalition of anti-violence programs, the homicide rate in the LGTBQ community is highest amongst trans-women. In 2013, over 72% of all LGTBQ homicides were trans women, over 67% of trans women of color.”

Even though Cox provided stats that touched on the United States, it paints a reflection of what has occurred in Toronto just a few months ago. Sumaya Dalmar, a black trans woman who was found dead and according to Toronto Police, was not ruled as a homicide although social media suggested otherwise.

Although there has been many steps forward for equality within the LGBTQ community, this particular point of trans-women of colour being suicidal, missing or murdered without full media coverage and interest to the police, and public interest must be acknowledged. A Go Fund Me page was set up for Sumaya Dalmar to cover funeral costs as well starting a scholarship in Sumaya’s name which will be placed within a local university that supports Black trans students.