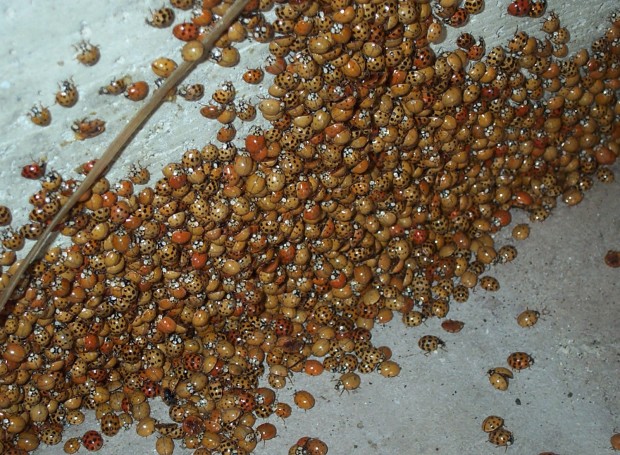 Swarms of ladybug-like insects are invading Toronto neighbourhoods because of the unseasonably warm weather. “These are not the usual friendly ladybugs we are used...

Swarms of ladybug-like insects are invading Toronto neighbourhoods because of the unseasonably warm weather.

“These are not the usual friendly ladybugs we are used to. They’re Asian lady beetles are these guys are a bit more aggressive, especially when it’s a bunch of them,”  says Halina Shudorwitz, owner of Ladybug Pest Control in Etobicoke.

Shudorwitz says the Asian lady beetle tends to look for shelter in the fall, usually inside homes to hibernate. But the unusually warm weather has caused a bump in their numbers and as a result, many neighbourhoods are crawling with the aggressive beetles.

“They’re everywhere, my car, my apartment. I’m surprised to see them this late in the year. They hide in the corners somewhere in my house every time I think I’ve gotten rid of them a few more pop up,”  says Aman Dhillon, of Etobicoke.

Dhillon says she has a friend who has been bitten a few times and although the bite is not poisonous it still hurt her.

“ I’ve been getting a lot of questions about the ladybugs in the buildings but they aren’t ladybugs. They have been burrowing into nooks and crannies all over buildings and pop up in the most unusual places,” says Etobicoke building manager Ian Bradshaw

Shudorwitz says there are a number of ways to control the pests from getting inside your living space.

“It’s best to find and cover up any holes which they could be using to enter your home. Once they are in your house they are there to reproduce away from incoming cold temperatures. You don’t want to crush them either, they give off a nasty, very potent smell. Use a vacuum cleaner to clear them out but remember to empty the vacuum outside once you have,” Shudorwitz says.

Bradshaw confirms seeing groups of the beetles here and there since the weather has warmed up, though he usually does not see swarms of them.

Shudorwitz says she is worried what the beetles will  do to the local ladybug populations, but they have been known to eat other insects too. She says the beetles to reproduce at rapid rates.