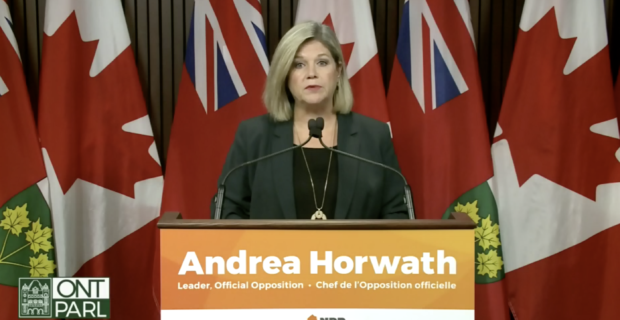 In a news conference Monday morning, NDP leader, Andrea Horwath released a second set of leaked documents detailing what her party is calling the... 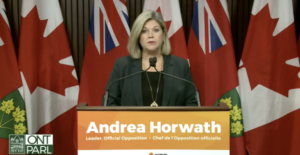 This comes after the first set of documents were released by the NDP last Thursday. These documents outlined the PC’s plans to scrap Local Health Integration Networks (LHINs) and replace them with a centralized oversight in the form of a “super agency”, which Horwath says will open the door to privatization.

LHINS are crown agencies established by the provincial government which all integrate to fund health services at a local level. These services include hospitals, long-term care homes and mental health and addiction agencies. There are currently 14 LHINs in the province.

Both Premier Doug Ford and Health Minister Christine Elliott, responded to these claims and denied plans to privatize the health care system and said the government is committed to a public healthcare system.

However, during the news conference Monday, Horwath said that the Ford government plans to privatize inspections, labs, assisted devices, and ORNGE. Horwath accused the Ford government of creating a system that siphons money from front-line care to corporate organizations.

“The government is going to take out public healthcare dollars to line the profits of big corporations in Ontario – taking money out of front line patient care and handing it over to big private corporations is not going to help our healthcare,” Horwath said.

According to Horwath, the documents show the cabinet already signed off on the proposed legislation on January 16th.

“The cabinet has already approved in this scheme, it is clear in the documentation. At the end of the day they already have a plan in place. It’s pretty shameful to watch the Minister of Health and Premier deny that privatization was part of the plan as we can see it’s the centre of the plan.”

Horwath would not comment on whether her team has more healthcare documents. The provincial government is scheduled to release official documents outlining their plans for healthcare this spring.

Chief Financial Officer of the Ontario Progressive Conservatives office in Guelph, Adam Currie says this is part of a fear-mongering tactic that Horwath and the NDP are using to draw more supporters.

“As usual, Andrea Horwath is using fear mongering tactics to scare Ontarians into believing health care will privatize. During the election, she constantly told this narrative that healthcare will be privatized – she will grasp on to any straws to push this narrative.”

The PC CFO also said these documents have not been approved yet, despite Horwath’s claims.

“The draft bill was never introduced to the legislature and was simply being drafted to analyze how the government can improve the healthcare system.”

One of Horwath’s main concerns is the proposed funding cuts from front-line care. Currie says he believes a centralized system will put more money into the sector.

“Currently there are many health organizations across the province that are completing duplicate work as these organizations are generally operating in a silo. Combining them into a centralized system could require less staff and eliminate duplication, leaving more funds available for front line care,” Currie says.

Shortly after Horwath’s announcement Health minister, Christine Elliott spoke to the media and called the document leak an NDP attempt to use healthcare for political gain.

Elliott also highlighted that the documents released by the NDP are drafts created by Ontario Public Service, and that nothing has been finalized.

“We will not be privatizing any of the services referenced today by Andrea Horwath, in fact the documents she released today are internal, non-partisan documents, that I have never seen. It is an ordinary course of business for the public service to develop draft options for consideration by government with the intent of delivery of goods and services,” Elliot said at her press conference.

Elliott accused the NDP leader of using these leaks as a way of fundraising and to benefit her leadership review at an upcoming party convention.