Humber97 Ontario24 Teachers Strike2
The 2017/18 school year was hard. It was hard for students and it was hard for teachers. In October 2017, college teachers across the... 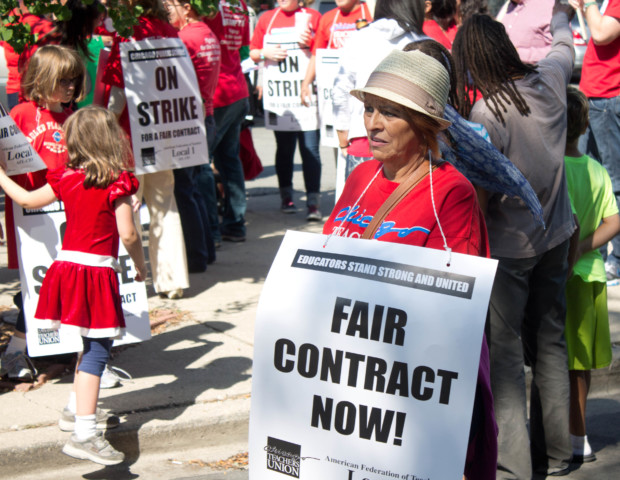 In October 2017, college teachers across the province voted to strike after five months of failed talks to renew their contracts with the College Employer Council (CEC.) What resulted was five weeks of uncertainty for hundreds of thousands of college students across the province. As students faced the possibility of a lost semester, 10% of enrolled students chose to drop out of school with a full tuition refund. The students that didn’t had to deal with a highly condensed workload.

A little over a year later, we’re starting to see how the strike effected the college community at large.

Students were dropping out and struggling

As the school year came to an end, many international students couldn’t stay in the country for the full duration of their program. That was the case for Anish Goberdhan, an international business student from Trinidad. Goberdhan went home two weeks before the end of his winter semester and had to work extra hard to get all of his grades submitted in that time.

“Because the semester was condensed, I wasn’t even able to do all my courses. I had to drop one, which was an elective, so that pushed me back. I have to do that one course this summer in order to graduate,” he said. “Those are the two things that effected me the most. The course and the price.”

Goberdhan chose to go home during to the strike. For him, living in Canada for the duration of the strike would have cost him more than paying for plane tickets to Trinidad.

“One plane ticket to Trinidad usually costs 4000 Trinidadian dollars.” The trip cost him $1,600 Canadian in total, but he saved money on groceries and rent.

Some students found their academic careers completely come to an end with the strike. That’s what happened to Terry Konstantinidis, who took the opportunity to drop out without financial penalty.

“During the strike, there was a lot of extra work that they made you do in a short period of time. I wasn’t able to do it to the best of my abilities, so I just cut it out,” he said.

Today, Konstantinidis spends his time streaming popular games such as Fortnite on Twitch. Though the strike was challenging for him in the moment, he acknowledges that it’s had a positive effect on his life.

“It gave me a lot of time to think about what I should be doing with my life instead of school. I became a streamer. Streaming is what I do for a living, it pays fairly well. As I’m growing as a streamer, it’s paying better than what I’d get if I was going to be a full-time student working a part time job.”

Konstantinidis says that he’s taken the strike as an opportunity to pursue his dreams, but it’s offered him the opportunity for personal growth as well. “It really did show me how to live by yourself. I have to go grocery shopping, I have to go to work, I have to do this, I have to do that. There were a lot of responsibilities on the line, which was a nice experience.”

At first though, Konstantinidis had to deal with breaking the news to his family, who were very insistent that he pursue his education.

“My dad is super strict when it comes to school. Telling him that I was going to drop out was really scary. It was hard, it really was.”

Konstantinidids hasn’t ruled out school in the future though. He says if streaming doesn’t work out for him in the long run, he plans on going to school to become an electrician like his father.

Students who did choose to re-enroll after dropping out are still faced with their own unique challenges, though. Noah Posocco chose to go back to school after spending the year building up his savings. Now he finds himself in an awkward space with his courses.

While he was out of school, Posocco spent his time working, but he always had his eyes set on getting his education. Though his plans to graduate have been set back, Posocco doesn’t regret taking the time to build himself up financially. However, the uncertainty he faced during the strike was the worst part of the ordeal for him.

“I always had the intention to return. I don’t like not knowing my future. Whenever things like this happen, it’s stressful.”

The strike period itself was hard for Posocco. While he struggled to decide what to do, the back and forth between the college and the teachers union didn’t help.

“Having almost no certainty when the strike was going to end, if I could go back to school in a week or so… I was at midterms when it happened. I was eager to get my grades back, but nope, on strike.”

Schools lost a lot of money

But it wasn’t just students who were hurt by the strike. 10% of students, approximately 25,700 across the province, chose to drop out for the semester. The monetary effect on colleges was significant.

Humber College is one of the biggest collegiate institutes in Canada. Humber estimates a $500,000 loss in revenue as a direct result of the strike. According to Humber’s Director of Communications Andrew Leopold, this is due to “the withdrawal of full-time students, additional student support services required during and after the strike, lost net revenue for services such as the book store and food services, and the cancellation of events and training activities.”

Leopold says outside of financial impact to the college, “There haven’t been any changes to job portfolios as a result of the strike [and it] has not effected enrolment.” He also says that the majority of the students who dropped out have since returned to school.

In the 2016/17 school year, Humber had 54,153 enrolled students, and enrolment at Humber has been marginally increasing every year for the past several years. The average student at Humber looks at about $15,000 in tuition fees per year, or about $7,500 per semester. If 10% of Humber students chose to withdraw, that accounts for approximately $40,614,750 Humber lost in withdrawn tuition fees.

It is unclear how the college calculated $500,000 lost in revenue because of the strike.

For Humber’s student union IGNITE, the effect was worse. Humber reports a consistent increase in tuition revenue between $5 million and $10 million every year. In the 2016/17 school year, they brought in almost $190 million.

IGNITE, on the other hand, is a non-profit union. In the same year, IGNITE received $4,710,454 for its share of tuition fees. In the 2017/18 school year, that number dropped by half a million dollars. As a result, IGNITE ran a deficit of over $424,000 because of tuition lost in the teachers strike alone.

Today, the effects of the strike have mostly subsided.

Leopold says the majority of the students who dropped out during the strike have since re-enrolled at Humber. The school year is no longer condensed. Students and teachers now have enough time to get through the semester’s course work with relative ease and flexibility.

While Humber has yet to release a financial statement detailing their finances for this or last fiscal year, the college projects a return to financial normalcy. This is reflected in IGNITE’s financial reports that show 2018’s annual revenue in line with revenue in past years.

Evidence suggests that the storm that was the 2017 college teachers strike has passed. Though some students are faced with altered semesters and course loads for the foreseeable future, it’s nothing that should prevent their eventual graduation.

But the storm clouds are still on the horizon.

The strike ended when the Liberal Ontario government issued back-to-work legislation to save the student’s semester. There was no agreement between the CEC and the teacher’s union. In order to renew the contract between the teachers and colleges, the government had to impose their own binding arbitration. In a two years, their contract will expire again, and the issues brought to light by the strike will only have fermented in that time.

There is no safety net to prevent all of this from happening again.