The news release calls on citizens to be cautious with rental advertisements placed on Kijiji. According to Toronto Police and Elle Iakovenko, Toronto & GTA sales representative at RE/MAX, what happened at ICE Condos is a standard scheme that most scammers operate. After signing a short-term lease (through an Airbnb, for example), they get keys to apartments and upload the pictures on the websites like Kijiji or Craigslist. Pretending to be the places’ owners, frauds talk to victims over the phone and conduct showings, later asking them to send a deposit via an electronic money transfer. After receiving the money, scammers stop replying to victims’ calls, blocking their phone numbers and emails.

Elle Iakovenko says scams are very common in the real estate market. And when victims try to go and get some recourse, they usually end up losing their money for good. And even though Airbnbs were not allowed during the lockdown, some people were breaking the rules and were still listing their units.

“It was a little bit quieter during the lockdown, but I still came across people who got scammed out of their money on Kijiji during the pandemic,” says Iakovenko. She adds that now when the restrictions are officially lifted, and more people are coming back to Toronto, the scammers are back at it again.

A warning issued by Toronto Police specifically indicates that frauds often use a variety of names and represent themselves not only as property owners but also as rental agents. So, tenants must be careful when signing any rental agreements that might look legit at first sight. This is why Toronto Police encourage the public rent through legitimate agents that can be thoroughly checked. 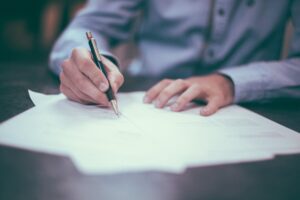 However, Iakovenko says that many people do not turn to brokerages while finding a place to live in. And these people are primarily students (as well as international ones) and newcomers to Canada. “Many people, in general, do not know that when a lease deal goes through, we, real estate agents, get paid from the landlord,” says Iakovenko.

Many people had to cut their monthly budgets and watch their finances even more closely when the pandemic hit. Domestic and international students who lost their jobs in the service industry, or immigrants who have not been in the country long enough to meet credit score and proof of income requirements – many of them stopped turning to realtors, finding websites like Kijiji to be a safer bet.

Iakovenko says there is nothing wrong with looking for ways to get a place and dealing with landlords directly. “Sometimes, I have a client that is not 100 per cent qualified, for example, a student that is not able to provide more than a few months of deposit for rent, or a newcomer, that is not able to get a guarantor, I always send them over to Kijiji – this is my go-to.”

However, Iakovenko says it is crucially important that the deal itself is overseen by a brokerage. She says hiring a realtor to oversee the paperwork and even go to showing with you when leasing directly from the landlord is something that will keep you a hundred recent protected from possible scammers. When a client shows up at a place with an agent, the majority of scammers get scared, put off. “They get spooked. I don’t think they will move forward because the real estate agents have the eye to see like if this is a scam or if this is actually legit.”

Those who can’t afford to spend half of a monthly rent budget on hiring a realtor can take a chance and ask the landlord for proof of the property’s ownership. However, by law, the landlords are not obligated to provide any such documentation.

“Yes, people absolutely have the right to ask for proof of who they are because tenants are asked to literally X-ray themselves: to show who they are, how much they make, etc., it can get really invasive. But the landlords have the right to refuse a tenant. They don’t owe anybody an explanation,” Iakovenko says.