Unique Canadian Premier League season ends, with playoffs up next

football8 Soccer20
The 2021 Canadian Premier League regular season was another strange one for the fledgling soccer league, in just its third year. After the 2020...

The 2021 Canadian Premier League regular season was another strange one for the fledgling soccer league, in just its third year.

After the 2020 season was shortened to a month-long tournament-style format in a bubble in PEI, the league was committed to delivering a full season this year, and pulled it off.

Another bubble was needed to get the season underway in late-June, this time in Winnipeg. Each team played eight matches at IG Field, against the teams from the other side of the country to reduce travel when the clubs eventually went back to their home cities. When they got back home at the end of July, they played 10 times at home and 10 times away, for a full 28-game season.

“It was a very different year, I think everyone would say the same thing,” said FC Edmonton striker Easton Ongaro in a press conference with reporters after his side’s final match of the season — a 1-0 win over the defending champions Forge FC in which he scored the winning goal.

“It’s not something we ever expected we’d experience, and we managed to work through it and go through all these experiences together. Obviously we’re going to look back on this year for the rest of our lives, the last couple of years, and remember it because it was so different. It really tested us as individuals, and made us come together and work through things.”

Condensing a 112 regular season games league-wide into 143 days was no small task, and took a lot of commitment from the players and staff to play every few days for four-and-a-half months.

The schedule also became unbalanced at times. FC Edmonton, for example, had a stretch where they played eight times in the month of July, but then at the end of the season they then played half as many games from October 13 to their season-ending game on November 13.

“I know how difficult it was for everybody’s schedule,” Edmonton head coach Alan Koch told reporters ahead of that match against Forge FC on the weekend. “I hope we don’t have to go through this next year, because there was a time here where we were playing games every 2-3 days. I don’t blame anybody by any means. I just hope we get it right next year.”

Koch also mentioned that he hopes next year the schedule can go back to being balanced, so that clubs aren’t meeting each other 5-6 times in one season. In an ideal world, the season was planned to have each team play each other twice at home and twice away to make up the 28 games, before the pandemic forced them to adapt.

To limit long-distance travel in a country as big as Canada, the CPL also changed the format a bit so the four western clubs – Pacific FC, Cavalry FC, FC Edmonton and Valour FC – played each other more often than they did the eastern clubs – Forge FC, York United, Atlético Ottawa and HFX Wanderers – and vice-versa. 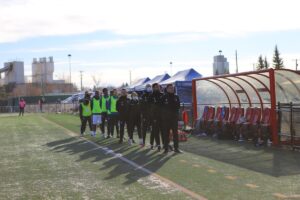 While the season is over for the Eddies — the nickname for Edmonton’s club — who finished seventh, the top four clubs from the regular season move onto the playoffs.

As the regular season champions, Forge FC get home field advantage through the playoffs, and that begins with a match on Sunday, November 21, against Ontario rivals York United.

Forge head coach Bobby Smyrniotis is happy with how his side’s season has panned out. The success speaks for itself. They’re within touching distance of a third-consecutive CPL title, have made it into the semifinals of the CONCACAF League, and have qualified for the 2022 CONCACAF Champions League (the North American cup competitions). They nearly pulled off an upset in the Canadian Championship as well, holding off Major League Soccer team CF Montreal for 90 minutes in the semifinal, only falling on penalties in the David vs Goliath matchup.

Smyrniotis also knows, despite their fantastic season thus far, the work isn’t done if they want to bring more trophies back to their turf at Tim Hortons Field.

“Where we started was about 10 days of preseason before the Winnipeg bubble, and the difficulties we had in preparation for that,” he said at a press conference ahead of the match against Edmonton. “Now you come all the way here, and you’re in first place for the second year in a row, accumulating the most points to finish the season.

“When you go back to whenever that was that we were told we’re playing in 10 days to now, you’ve got to be happy with where we are.”

Cavalry FC and Pacific FC get the 2021 CPL Playoffs underway on Saturday, November 20 with a match at ATCO Field in Calgary. The Forge FC vs York United game will take place the next day, with the two winners squaring off in the final.

If Forge beat York, they’ll host the final as the number one side this season, but if fourth-seeded York United pull off the upset, they’ll visit the winner of Saturday’s game for a shot at the North Star Shield.