Explainer: why we mark Remembrance Day on Nov 11

In many countries around the world, November 11 marks a day of commemorating the fallen soldiers who died in the first world war and...

In many countries around the world, November 11 marks a day of commemorating the fallen soldiers who died in the first world war and subsequent wars that followed.

On Monday, Nov. 11, 1918 at 11 a.m. the Treaty of Versailles was signed, bringing an end to World War I, the five year long war that killed millions of people.

In 1919, Armistice Day was observed throughout the British Commonwealth to commemorate the day the treaty was signed. In its early years, the day was observed on the Monday on the week of which November 11 fell.

In 1931, Alan Neill, a member of parliament for Comox-Alberni, B.C. introduced a bill to tie Armistice Day to November 11, which was passed by the House of Commons. The bill also changed the name to “Remembrance Day.”

From November 11, 1931 on Remembrance Day has been what we know it to be today.

Danny Martin, the Director of Corporate Services for the Royal Canadian Legion, and a military veteran, said Remembrance Day means everything to him.

He explained that in 1936, the Canadian National Vimy Memorial was built in France. This was the year that the Royal Canadian Legion first adopted a National Silver Cross Mother. This is a symbol of personal loss and sacrifice on behalf of widows and mothers who lost a child on active duty or because of duty.

In 1939, the National War Memorial was unveiled in Ottawa, continuing the commemoration of our veterans. From then on, Martin said, the format of the Remembrance Day occasion has remained the same.

Remembrance Day means a lot of things for many people. Anne Cottrell grew up hearing stories from most of the men in her life, as well as her aunts.

Cottrell was born in 1945 in Northampton, England to Alfred James Brett and Sylvia Ellen Davies. Her parents met in 1939, at holiday camp on the Isle of Wight. Her father had already enlisted in the Navy and was gone a week later. After many years of back and forth letters, the two got married in 1942, before he was off again.

In early 1945 Brett returned home and nine months later, Patricia Anne Brett was born. (She now goes by Anne Cottrell.) Her father was in Korea when she was born and returned when she was around 18 months old. 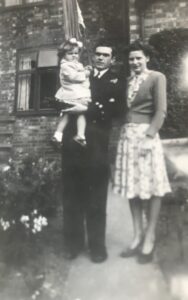 Cottrell’s father was posted in Korea, South East Asia, Australia and did peacekeeping throughout the world. He had come home at some point and in 1952 her brother Richard was born, again without her father present.

Cottrell recalled a day when she was sitting in her family living room at home, now aged five or six, when a taxi pulled up. Her dad jumped out and she rushed to the door to see him. He had just come back from Japan and brought with him small wind-up toys, that she says she was “too busy playing with” to acknowledge her father.

At the height of his career, Cottrell’s father was a Chief Petty Officer. “Not a big thing, none of my family reached high status but they did their part,” she said. In 1955, her father decided to leave the Navy. As a trained marine engineer, he came to work on the River Thames.

Cottrell started by sharing stories of her father, but two other very important men in her life were part of the Great War that came before. Both her maternal and paternal grand fathers fought in the trenches for the Allied Powers.

When the U.K. entered the First World War on August 4, 1919, Cottrell’s grandfathers went with them. This was also when Canada joined the war as a British Dominion.

To Cottrell, and to many veterans like Martin – Remembrance Day is a day for remembering all of the sacrifices that were made. It is a day of remembering what their lives were like before the war, their families and loved ones and everything in between.