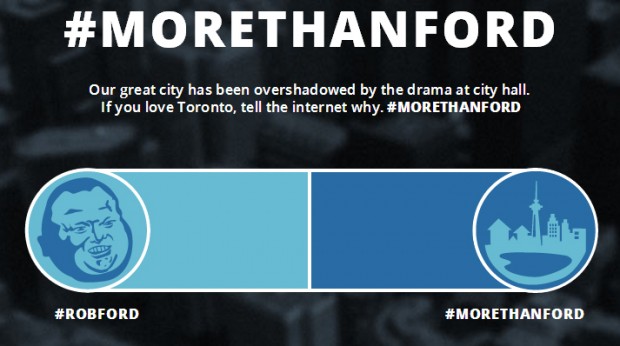 More Than Ford campaign puts focus back on Toronto

Rob Ford24
With the Rob Ford drama consuming the headlines, it is time to remind ourselves of the better aspects of Toronto. That is the idea...

With the Rob Ford drama consuming the headlines, it is time to remind ourselves of the better aspects of Toronto. That is the idea behind the ‘More Than Ford’ social media campaign created by Marie Richer and Hanna Smit.

“Most Torontonians are feeling down and helpless about what is going on with Rob Ford,” Richer said. “We have the skills to put together a campaign and felt a sense of responsibility to do something.”

The idea spawned Friday Nov. 8 over a conversation at lunch at the downtown advertising agency where Richer and Smit both work. Since then they have been pooling their resources to push this movement. They created a YouTube video mashing up the sights and sounds of Toronto to the song Live this City by the Toronto band Dragonette. (Update: The video has since been taken down due to copyright reasons)

“When I watch the video I feel really proud of my city and it was really nice that it resonated with people,” Richer said.

Since the campaign started Torontonians have taken to Twitter to remind the city and the word that Toronto is more than Ford. “We have one thing to be ashamed of and 5 million things to be proud of in this city. #Toronto #MoreThanFord,” Naomi Blackman (@NaomiBlackman) tweeted.

“The site is there to take back the conversation and make sure we don’t forget how awesome Toronto is,” Richer said.

The More Than Ford campaign comes as the Ford controversy reaches new levels. On Wednesday, city council voted 37-5 to carry a motion asking Ford to take a leave of absence. Since then new information has come out about Ford drinking and driving.

“I think it’s pretty sad that we’ve reached this point, to be honest,” said Matt Elliott, a City Hall columnist for Metro News.

“We feel like we have to defend ourselves and our reputation as a city because of the mayor and his antics.”

For Richer the campaign started out of a dissatisfaction with the mayor’s antics.

“I think he should resign,” Richer said. “He is a detriment to the city at this point and a mayor should lift the city up not bring it down.”

“We need someone to represent our city who isn’t embarrassing us,” Baskin said. “We need to take a more nuanced view about what’s wrong with him and what we need to change if we are ever going to have someone in charge of our city that we do agree with.”

The More Than Ford campaign resonated with Baskin. She says she “couldn’t agree more” with the campaign.

“Toronto is definitely more than Ford,” Baskin said. “We’re more than just a politician. There are 2.5 million people who live in this city and one person can’t be our city.”

Toronto is more than Ford to many people and that is the vision Richer and Smit want to convey.

For Baskin the best part of Toronto is that the city is “a cultural mosaic.”

Elliott says the highlight of Toronto is that it is a “city of neighbourhoods.”

“Go look at what citizens are doing to make their part of Toronto better every day,” Elliott said. “In schools, community centres, neighbourhood association meetings. That’s where change really happens.”